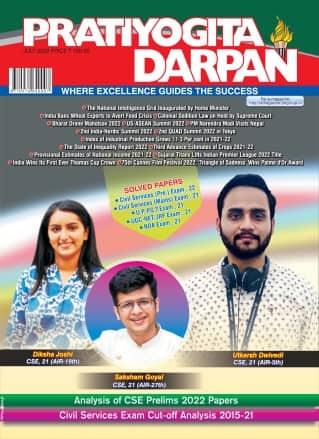 Pratiyogita Darpan July 2022 PDF (Hindi: प्रतियोगिता दर्पण) Is one of the most reliable source of current affairs, Which is designed for those students who are preparing for any competitive exam. for example agniveer navy, airforce, GD, SSC & UPSC.

Many incidents happen in the world day by day, such as talks between two countries, sports, Supreme Court judgments, etc. and students interested in all these events know the importance of all these events because it is common to ask them in exams. The real purpose of asking these events in the competitive examination is to know how aware the student is of the events around him.

Pratiyogita Darpan is a collection of these important events, in which many important topics have been accommodated, in which important articles as well as previous year question papers are also compiled.

PD Magazine was founded by Mahendra Jain in 1978 for students preparing for examinations at various levels, it covers all those major topics such as geography, politics, economy and current affairs and general knowledge, the basic knowledge of which every single student should know. This book is available in Hindi and English, students can get this magazine online and off-line mode.

Because now most of the questions are based on the latest events, so apart from your academic knowledge, it is also very important for you to be aware of daily current affairs, because every year many such examinations are organized by the central government and state government, for which To get selected, the candidate has to clear World Sports and National Current Affairs. And there are many such exams in which the situation of the interview comes in the second stage, for which current affairs becomes a very crucial part for us.

Through Pratiyogita Darpan July 2022 magazine, you can get all types of current affairs knowledge without reading any newspaper and bulky books.

Geography (India and The World)