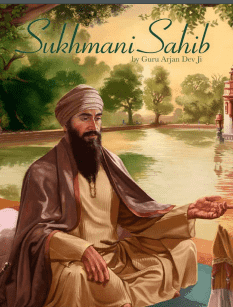 Sukhmani Sahib Path is a morning prayer of sikhs. it was composed by the fifth Sikh Guru, Guru Arjan Dev.

it is said in sikhism that he wrote this prayer for his devotee. who was suffering from great physical and mental pain.

Reciting the entire prayer it takes hardly 60 to 90 minutes. Sukhmani Sahib is believed to bring peace to every person’s mind and aid help remembering God constantly.

so if you are in trouble or physical pain. and you want to get peace, sukhmani sahib should be recited. after that you will feel good definitely.

This lesson takes about 90 minutes to complete. Which is usually done by all the people in the congregation of the Gurudwara. It is believed that reciting Gurbani daily brings peace to the mind.

Sukhmani is made up of two words: Sukh Sukh (peace) and Mani (treasure). Whenever a person is present in a Gurdwara to recite the words of Guru Granth Sahib, his head should be covered and shoes should be removed in this presence. Because Sikhs consider Guru Granth Sahib Ji as a living Guru. And the respect shown for the Shabad or ‘messages of the Gurus’ is unparalleled in the faith.

Please note that Gurbani is in general gender neutral when referring to God – so when translating to English, it has become impossible to maintain this gender-neutral stand as the English language is more gender-specific in this respect. Therefore the reader is asked to make adjustments in his mind for this while reading the translation! (In Sikhism God is gender neutral and in Gurbani he is referred to as both male and female.)